Eleanor Hannan
Embroidery work, Drawings, Paintings
Embroidery on Canvas
|
First Embroidery
|
Found Objects From Dreams
|
From the Ashes
|
Hand Embroideries Black and White
|
Heroine's Journey
|
Lunch
|
Painted Faces
|
Portraits of Forgiveness
|
Portrait Laboratories
|
Running Saints and Bleeding Dogs
|
Single Figure Paintings
|
Standing Figures
|
She Breaks Down
|
Small Excursions into Colour and Form
|
Three Bodies
|
Tight Rope
|
Venus and the Trans Am Totem
|
Workshop:Drawing From the Model on the Sewing Machine
|
1001 Funny Things You can do with a Skirt
|
Drawings for 1001 Funny Things You Can Do With a Skirt
|
Other embroidery work
« previous 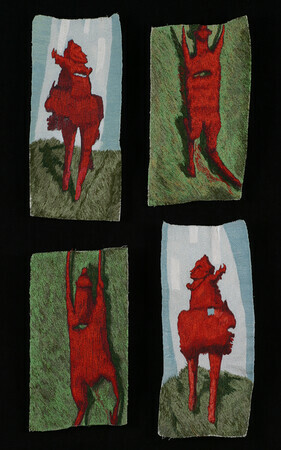 Unavailable
Inquire about this work

The Saint and Dog figures emerged from a machine embroidery technique I call "chipping away" at the surface of the stitched cloth until a form appears that to me is relevant or significant. The origin of the Saint is the human figure used in the project She Breaks Down.

The Dog is just the constant companion of my imagination; part personal part archetypal.

That Landscape is also a favourite of mine. Used often in a variety of forms, it feels like Home.

The red is blood, sacrifice, pain and freedom as well as pure visual contrast and complement.

The series is an ongoing favourite. The panels are made often in slightly differing ways. Currently I am working on numerous versions of the Dog.

Note: The words Running and Bleeding have a fascinating verbal and literal conjunction to me.